Mark Twain is once quoted as saying:

October. This is one of the peculiarly dangerous months to speculate in stocks. The others are July, January, September, April, November, May, March, June, December, August, and February.

Looking at history and the seasonal patterns of the stock market, we would have to conclude that October is, in fact, a very dangerous month for stock market investors. 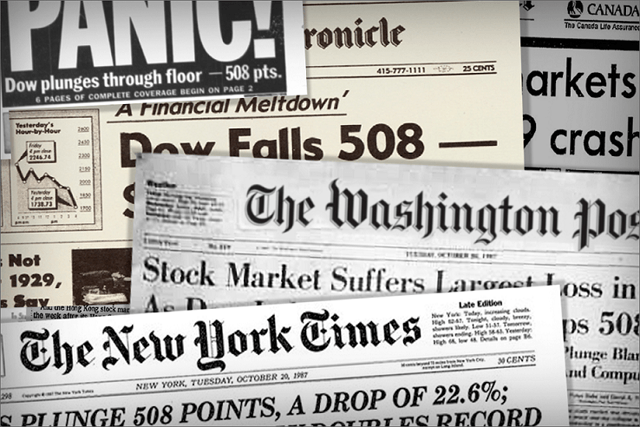 We have authored several articles on Seeking Alpha, since April 24, 2020; approximately one month after the major market averages hit their bottom.

The commentary from SA readers on these articles has been mixed, with some subscribing to the idea that we have seen the absolute bottom in stock prices and that we have now entered an era of a brand new bull market.

The biggest number of comments by SA readers, who believe in this narrative of a new bull market, generally fall into two major camps.

1. Don’t fight the Fed, or to put it another way, the Fed has the stock market’s back.

2. The economy will come back stronger than ever once the Coronavirus disappears.

Comment number one’s understanding is straightforward and needs no explanation.

The second one, however, shows that many investors have been falsely led to believe that prior to the COVID-19 pandemic, the economy was in remarkably great shape.

We can reference all the charts and graphs that are out there to produce a counterargument to this point, but rather than do that, we would like to ask investors just one question.

If the economy was in such great shape, prior to the onset of the COVID-19 pandemic, why was the Federal Reserve slashing interest rates at just about every conceivable opportunity, after raising them in 2018.

A healthy economy can easily withstand an increase in the cost of borrowing, yet the Fed was forced to cut interest rates three times in 2019. This all happened before the appearance of the Coronavirus.

Was this a sign of a strong robust economy? We think not.

In fact, the U.S. economy was showing signs of recession long before the Coronavirus hit U.S. shores.

So, if the U.S. economy were already showing signs of slipping into a recession, and now is at depression level economic activity, what would a return to pre-COVID-19 economic activity mean? Another recession? Is that a good backdrop for increasing equity prices?

Furthermore, if we were already seeing signs of an economic slowdown, would not the stock market have eventually fallen from the lofty levels it achieved in early 2020? How far would stock prices have to fall to discount a recessionary economy?

It is almost as if investors are convinced that the economy will recover to its former glory days, but those glory days were already in jeopardy before COVID-19 even came along.

This is the mindset that is driving today’s stock market, and for those of us who can see beyond the next bend, we know what is coming.

It is not going to be pretty. That is for sure.

Investors are living in a fantasyland, expecting that no ill could possibly befall the stock market while the Federal Reserve keeps pumping money into an already overblown bubble.

That is a rather shortsighted view of how markets work, when left to their own devices, and is void of any fundamental analysis.

It is obvious, to us, that all understanding and acknowledgement of economic fundamentals, and their impact on stock prices, have been replaced with a myopic and dangerous view of the equity markets as a financial game parlor where you place your bets and hope for the best.

The Robinhood phenomenon is a perfect example of how the masses can be led to believe that investing in the stock market is so easy that even a baby can do it. 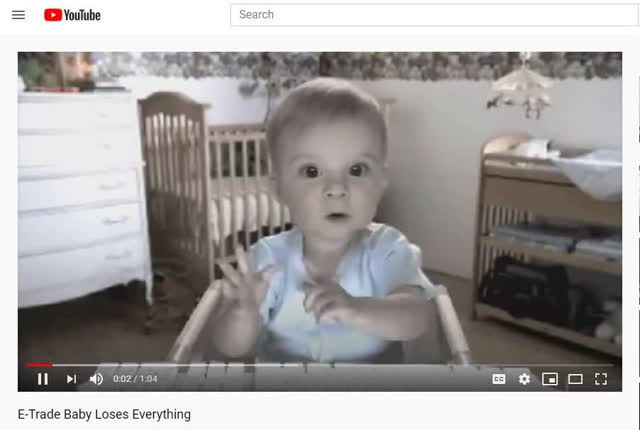 Many of you may remember this E-Trade commercial when it first appeared on television. If you haven’t seen it, we encourage you to watch it, and if you have seen it before it is still worth watching again.

This seems very apropos to the circumstances we find ourselves in again today with Millennial’s day trading activity, through the Robinhood, platform in focus.

Leon Cooperman, in a CNBC interview, weighed in on the Robinhood situation and offered the following perspective.

“They are just doing stupid things, and in my opinion, this will end in tears,” Cooperman said on Monday on CNBC’s “Halftime Report,” referring to a flood of new retail investors into brokers especially the millennial-favored Robinhood.

There are two particularly important factors whose outcomes have the potential to dramatically affect stock prices as we move into the Autumn months.

The first is a defeat of President Donald Trump at the polls in the November 2020 election. The second is a resurgence of the COVID-19 pandemic, causing potentially devastating health and economic effects.

While no one can accurately predict events like these with such a variable outcome, it does make sense for investors to factor in the possibilities for these two scenarios when assessing the investment landscape going forward.

President Trump has recently been losing ground in some of the larger polling venues that are viewed as important to gauging the political landscape.

In modern political history, an incumbent’s job approval has been the single best measure of his re-election prospects. If this holds true in 2020, the current outlook for President Trump is bleak, and his ability to turn around his situation will steadily decline as election day nears.

Against this backdrop, President Trump is in big trouble. After peaking in April between 45.8% and 47.4%, his job approval has fallen by 5 points to just 42.6% (Real Clear Politics average) or 41.0% (FiveThirtyEight adjusted average).

It will not be easy for President Trump to reverse this tide. There’s just one recorded instance of a president moving his job approval from a level suggesting defeat to one pointing to victory during the final months of his first term. In June 2012, President Obama’s job approval stood at 46%. By the day before the election, it had risen to 52%. He ended up with 51.1% of the popular vote. Remarkably, all of Obama’s gains occurred in September and October.

Regarding the resurgence of the COVID-19 pandemic, as we enter the cooler weather days of September and October, there are conflicting thoughts as to the likelihood of the virus returning, and what the impact will be on social behavior.

Whether you subscribe to the view that the worst is over for this pandemic, or that the worst may yet lay ahead, there can be no question as to potential impact either outcome will have on financial markets. 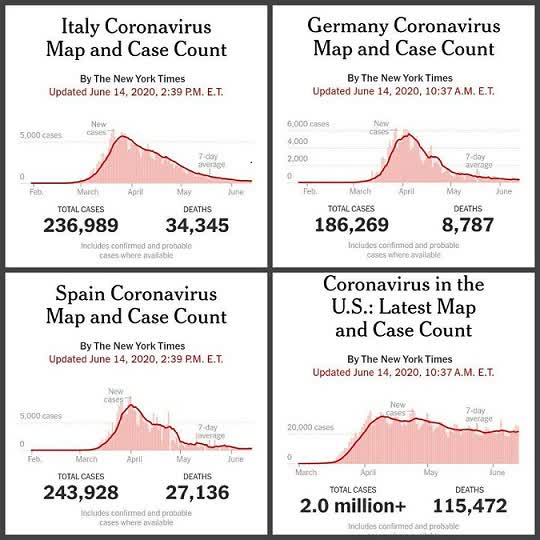 Looking at the progress that has been made by countries that were especially hard hit by COVID-19, we see that Italy, Germany and Spain are experiencing a down-slope; showing that they have done a good job at arresting the spread of the pandemic.

Here in the United States, we have not done nearly enough to achieve the same kind of results. At best we have plateaued, but with some states now seeing a spike in Coronavirus cases, we could soon see another rise in the number of reported cases through the summer and into the high-risk colder months of the Fall and Winter.

The latest news which has us scratching our heads is that President Trump wants to hold political rallies with upwards of 60,000 supporters in attendance, with no requirement to wear a mask or practice social distancing.

Attendees, must however, sign a waiver that if they contract the Coronavirus at a Trump political rally, they will be unable to file a lawsuit of any kind for damages or restitution. 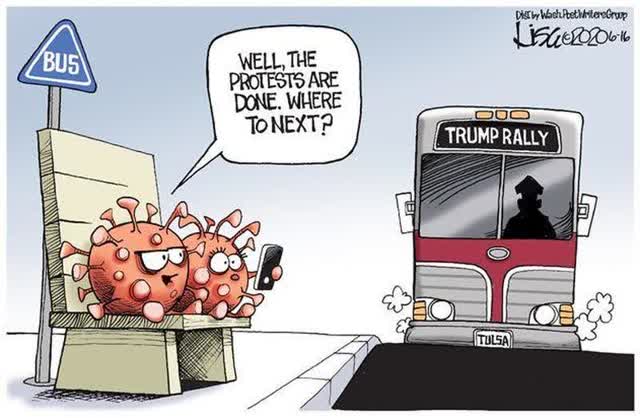 Any evidence of a second wave could create the kind of uncertainty that markets despise. The important point to emphasize is that it is not so much whether the country could be forced to enter a second period of mandated stay-at-home orders.

What matters is how people will react emotionally to a second wave occurring.

If the confidence in our ability to contain a second wave should fail, it will not really matter what policies federal and state politicians will choose to implement, if any.

People are already behaving in accordance with their own priorities and beliefs, irrespective of what public health officials tell us. We see it every day, and it makes us question how seriously the public is taking this deadly pathogen.

We heard a story the other day about a woman who was shopping at Costco and spotted another shopper walking around with his mask dangling around his neck. When she asked him if he would mind placing his mask over his nose and mouth, he told her that Costco only said that he had to wear a mask; they did not say that he had to wear it a certain way.

It is these types of situations that show a total disregard and indifference to the health and safety of others. Wearing a mask is not so important for your own protection, but it is for the protection of others.

The rather cavalier attitude among young people is especially distressing.

Much of what we have heard has been about how the COVID-19 virus affects older people, but it has also exacted a very heavy toll on a number of very healthy people who you would never think could be impacted this way.

Two stories in particular stand out. A nurse from the San Francisco, California area, and a man from right here in our home state of Colorado.

If individuals are not confident in their own safety, they will likely pull back from engaging in normal social activities; opting instead to stay home of their own free will and volition. People like the person in the story above only fan the flames of fear because we all must trust each other to do the right thing.

In many of our past articles we have expressed our concerns over a second wave appearing in the Autumn months. This is not simply an off-the-cuff opinion. We have spoken with others in the field of virology and epidemiology, and base our view on their professional opinions, along with our own observations of how people are behaving. 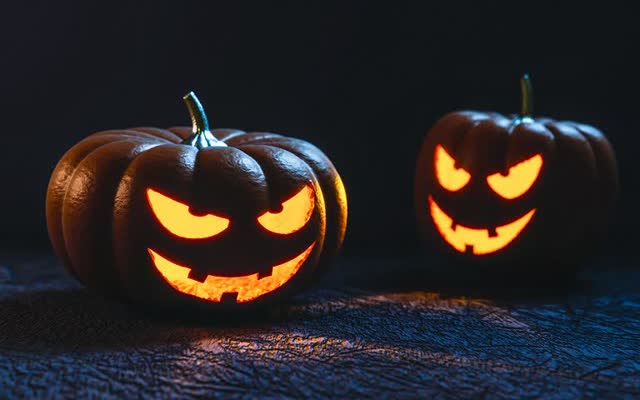 We believe that we are entering a period of high volatility in the stock market, and we expect to see that volatility continue as headline news will now take front and center stage throughout the rest of the summer months.

The confluence of two of the most important factors, which will ultimately determine the direction of stock prices, is only months away.

Investors need to prepare for either eventuality; perhaps by raising cash or hedging out a long exposure to equities.

Investing in the stock market is all about managing risks.

Now is NOT the time to place huge bets either way, but a time to think about scaling into and out of positions as market conditions warrant.

When we look at the approach that some investors, like the Robinhood crowd, are taking, we almost sense that risk is a four-letter obscenity to them.

As students of past market history, we are convinced that we are in a massive bubble, which will end as all bubbles do; very badly.

It is up to each individual investor to assess their own tolerance for risk and to build a portfolio, accordingly, especially as we approach what is typically a weak seasonal period for stock prices. 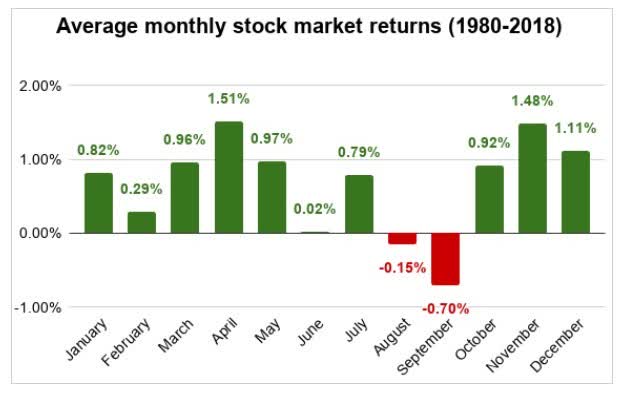 Remember that September is a quad-witching month and October options expire on the 16th of that month, just one day after the Ides of October.