I think that I am not the only one who can no longer fully understand current stock market developments. Not only are we in a crazy rally, but there are indications that the recession will last longer than some people think. There are also signs that the rally is not being driven by smart money at the moment. While there is still no real alternative to equities, investors should prepare themselves for uncomfortable quarters, as it seems that there are a lot of shaky hands in the stock markets. I will now focus my due diligence even more on defensive business models and solid balance sheets. I might also increase my cash ratio.

Behind us lies one of the most massive stock market crashes

The COVID-19 shock was one of the most violent sell-offs in recent history, bringing stock markets worldwide to their knees. Governments around the world have paralyzed the global economy with their lockdown measures. Many companies have even voluntarily closed their plants. Partly to protect workers, partly because suppliers stopped supplying products. For the Dow Jones, COVID-19 brought one of the five most severe slumps ever:

For the Dow Jones, the COVID-19 crash was one of the five most severe slumps ever.

During the crash, I made a decent purchase and was happy to have the opportunity to buy outstanding companies cheaply. Among them were Leggett & Platt (LEG), VF. Corp. (VFC), Johnson & Johnson (JNJ), Archer Daniels Midland (ADM),Munich Re(OTCPK:MURGY) (OTCPK:MURGF),Cisco,Henkel(OTCPK:HENKY), Iron Mountain, and Unilever (UL).

But a lot has changed since those dark days at the end of February and March. In March and April, the stock markets began to move again. At first,they said it was just a bear trapand a small correction to the abnormal fall in prices. The only problem was that the stock markets did not stop rising. In some cases, prices have recovered strongly again and have risen by more than 50 percent from their low point. The NASDAQ 100 has even set a new record high.

As such, I have nothing against rising prices. Even though I invest to generate cash flow, increasing the value of my assets is a welcome thing. My problem is, however: Things have moved too fast, too sharply. I mean, we are currently in a recession (the grey area), but it almost seems that the stock markets do not care about that anymore. 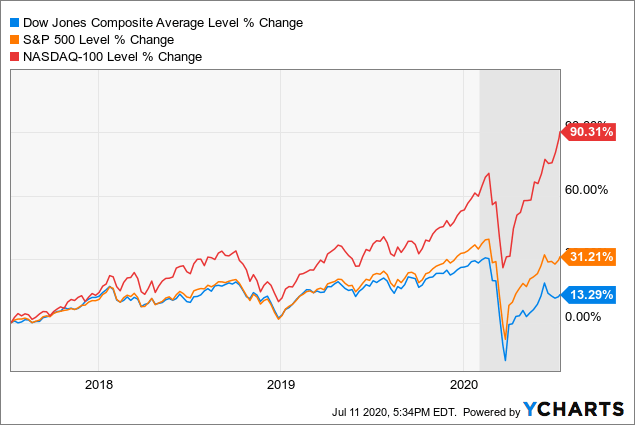 In the Great Recession following the financial crisis, things were quite different. The stock markets only managed to make a sustained recovery after the recession. 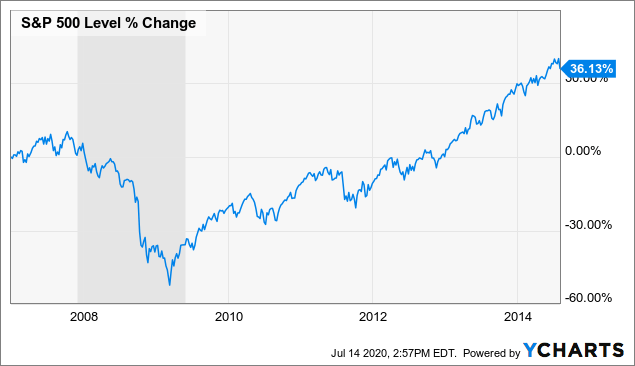 We will have several waves of different forces of nature

The second point builds on the first. An economic recession does not take place in a vacuum. It has consequences, on a small and large scale. Simple laws of nature also have an effect here. The first law of nature is that every severe recession will lead to a wave of bankruptcies, which has a cleaning effect on the market. Companies with a bad track record and lousy management and so-called zombies are simply washed away. The winners remain.

So far, however,bailouts have preventedworse things from happening. In the G7 countries, the bailout packages were almost as high as all previous bailout programs combined. Accordingly, the total debt also rose sharply, and in a fair world, someone has to pay for that debt.

Most massive Bailouts in history vs. G7 debt to GDP

So we already have a severe recession and extremely high government debt. And the bad thing is, the cause of all this is still among us. The coronavirus continues to spread, and nobody knows exactly how it will develop over the next few months. 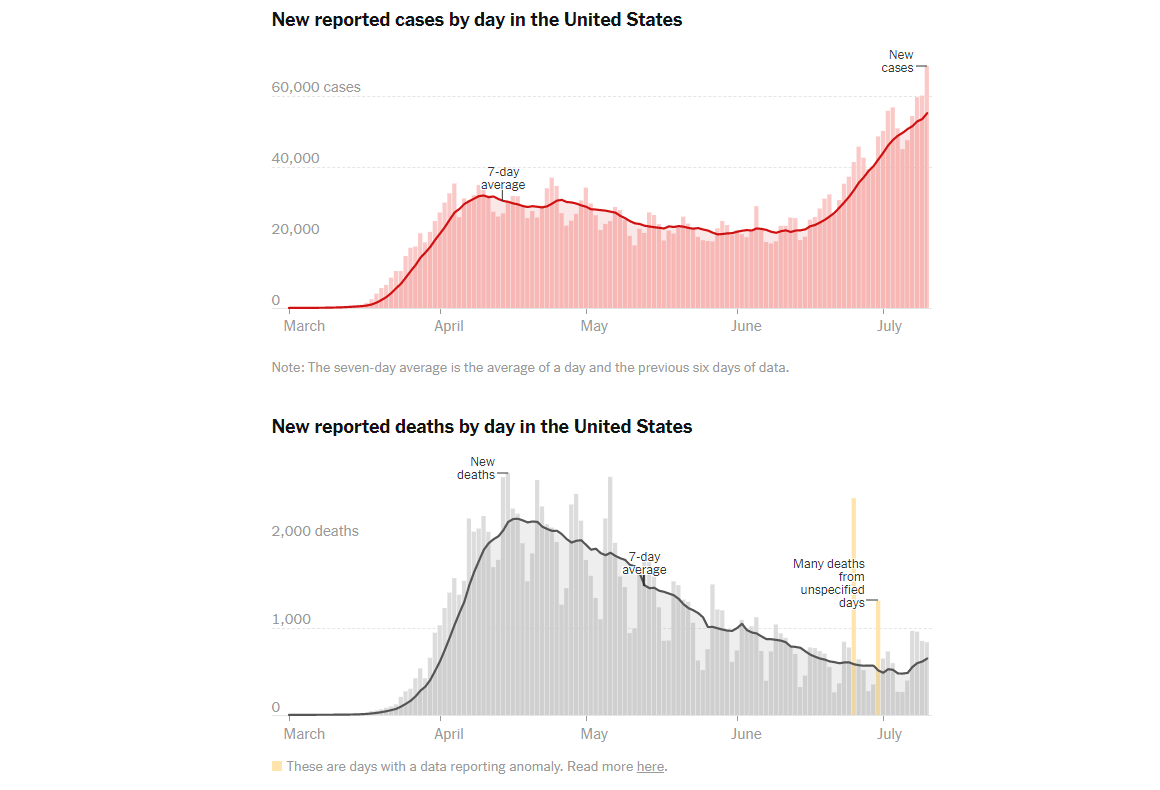 New Cases in the US (Source:New York Times)

It is quite possible that with the rapid spread of the virus in the USA, death rates will rise again. At some point, the politicians will give in and impose a second lockdown. It is also not unlikely that companies will voluntarily send their workers home, close the stores, and stop the machines. In any case, there is enormous uncertainty in the market and the economy. And stock markets hate uncertainty. But not at the moment and that gives me some concern.

What the dumb money does

In my view, the current bull markets are being driven far too much by impatient small investors and optimists. I can understand that. Especiallythe millennials are always told how much they can profit from stocks. But the problem was the ten-year bull market, statistically one of the longest. Familiar with the theory of markets and statistics,highly indebted millennialsdo not start to invest at the possible peak of a bull market. And then COVID-19 came along, and the stock markets plummeted. A lot of millennials have been waiting for precisely this. Besides, there was government support, a lockdown, and a lot of time at home in front of the internet. Cheap brokers with almost free trades, a sizeable blogging scene with investors who mantra-like promise early retirement if you only buy stocks regularly, have, in my opinion, created the perfect mixture for a bubble. Also, after years of waiting for the next crash, there is a great fear of missing the next rally. Whether private households can move the market in this way is, of course, not clear and difficult to prove.But it cannot be ruled out.

Schwab said in an email to CNN Business that more than half of its new clients since the start of 2019 are households under the age of 40, and that these younger customers are investing "at higher asset levels than normal, so they appear to be very engaged." The brokerage firm also noted that interest is much higher now than it was after stocks tanked in the midst of the Great Recession and Global Financial Crisis 12 years ago.

What smart money does

A few months ago, I already wrote that investors are increasingly parking their money in so-called money-market funds, which was the situation at the end of April. 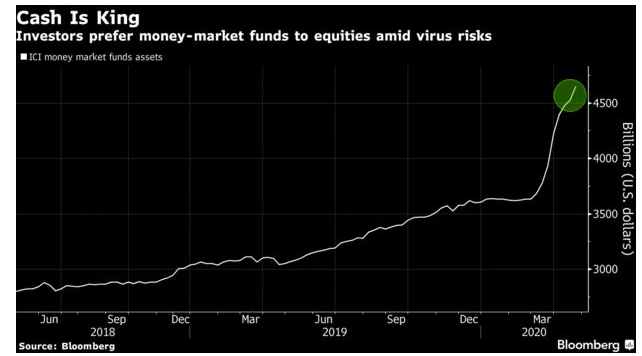 Why is that important? Money market funds are managed with the aim of maintaining a highly stable asset base through liquid investments. These include cash securities and bonds with a term of less than 12 months. Private customers and small savers cannot be found here. Only institutional investors are active on the market for money market funds, i.e., banks, insurance companies, and governments. Thus, players that have the most idea (or so they think).

Since then, the stock markets have continued to rise. And let's take a look at what happened to all the smart money that was parked in money market funds. Well surprise, as you can see, actually nothing has changed since April. The value of the assets is still significantly above USD 4500 billion / USD 4,500,000 million. With the outbreak of the COVID-19 crash, these assets have reached a plateau and have not yet left this plateau. 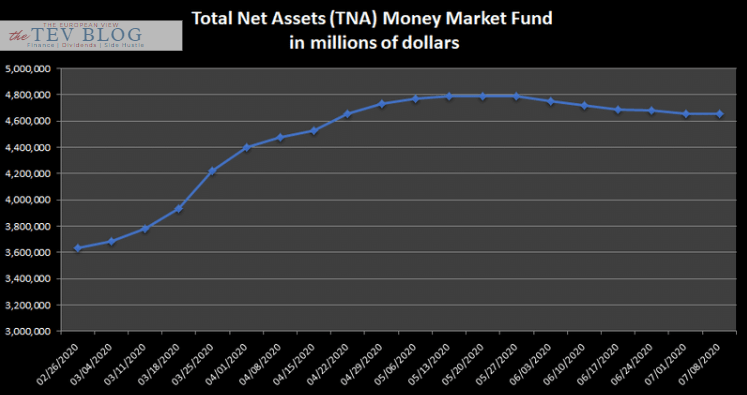 What smart money did so far (raw data: ICI)

Should you follow the smart money and wait for the mother of all stock market crashes?

I strongly advise not to fall victim to irrational actions in possibly irrational times, which applies to several levels. For one thing, you shouldn't follow the herd instinct and throw every cent you have into the stock markets like crazy. It can be bumpy in the future, also economically. So it's good to have a few coins in your pockets. Besides, you shouldn't panic and sell everything now. In the end, you would just be trying to time the market, andthere is a good chance that you will fail. In these times, just stick to the simplest wisdom of investing.

"The only reason for putting cash into any kind of investment now is because you expect to take cash out; not by selling it to somebody else because that's just a game of who beats who".

Just try to put yourself in the shoes of a sustainable and rational entrepreneur. That's what I do. My portfolio is my business, and I don't need it to explode, but I want it to grow sustainably and steadily, and I want to sleep peacefully. To be able to do so, I want the company to generate a profit or a profit equivalent, such as cash flow or dividend every quarter. There is nothing wrong with growth companies, but the majority of my investments should be profitable. So all I am doing is to look at what I can get from my companies in the future, and whether this is in a healthy relation to the share price. That's all.

There are good reasons to believe that the stock markets are currently in an unjustified state ofeuphoria and greed, which is mainly driven by the hype of the investors who have so far been standing on the sidelines. No one can time the market, but it is to be feared that there is a lot of shaky money in the market right now. I therefore expect volatile quarters. I will continue to invest my planned rates, but at the same time, try to accumulate some cash. It may well be that we can go bargain hunting again soon.