What Our Market Risk Indicator Has Taught Us In 5 Years

What Our Market Risk Indicator Has Taught Us In 5 Years

It is not easy to separate objective information from valuable opinion, and valuable opinion from noise. The S&P 500 (SPY, IVV, VOO) has broken a lot of resistance levels in February and March, but it has bounced and is “only” 16% below February’s all-time high as I write this. Perma-bears have been wrong for years, perma-bulls might be wrong in the future. This article presents a perma-agnostic approach. The first article on our systemic risk indicator MTS10 was published here on 5/21/2015, 5 years ago. Since then, members of Quantitative Risk & Value receive an update every week.

From market timing to Systemic Risk

Market timing based on binary indicators is dangerous. Even if you find an indicator “predicting” the 8 recessions in the United States since 1950 without a false alert, it is not a guarantee that you have found the holy grail of market timing. In statistics, being right 8 times out of 8 means there is a 95% probability that the indicator's accuracy is at least 67%. It’s the law of confidence intervals with a small data sample. How much of your savings would you bet on an indicator that has a good chance to be right 2 times out of 3?

MTS10 counts the bearish signals given by 10 indicators. Its value is an integer between 0 and 10. The components are based on various data series: S&P 500 index, market breadth, average short interest, U.S. unemployment, aggregate EPS, forward aggregate EPS estimates, housing starts, etc. They cover four fields of market analysis: technicals, sentiment, fundamentals, and economy. MTS10 is like an avalanche danger scale for the stock market, except it has 11 possible values instead of 5.

In both cases, we can evaluate the risk and make appropriate decisions. In both cases, a low risk is not a guarantee that an accident cannot happen. When MTS10 is at zero, it doesn’t mean that the risk is zero. In the market, like in the mountains, zero risk doesn’t exist. A black swan is possible at any time. However, a low MTS10 value is a clue that the market is robust and may be more resilient if something bad happens. It happened twice in 2018: The market fell sharply in February and December, but it came back to new highs a few months later. It happened again in 2020, and you will read below the current status of MTS10 about market risk.

The table below lists the 10 components updated every week-end. When a component is bearish, its value is 1, otherwise it is 0. MTS10 value is the sum of all components. 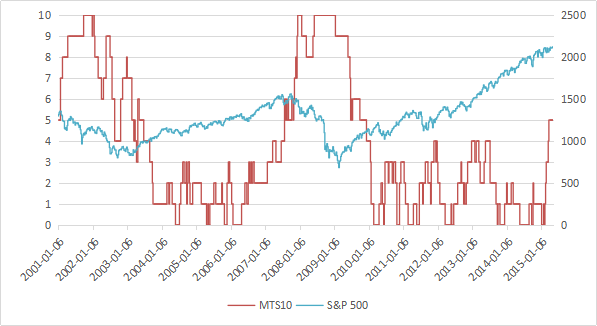 The next chart is more explicit. On the same period, it shows the sum of SPY weekly returns in % for each value of MTS10 calculated at the end of the prior week. 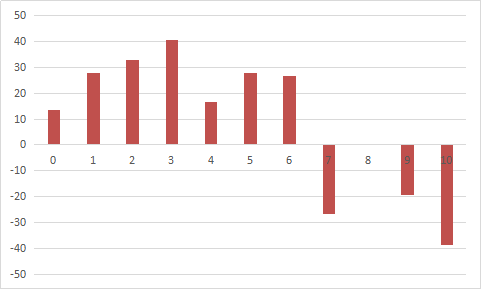 The returns in a state depend on the time spent in this state. The value for 8 (close to zero) is not very significant because the cumulated time when MTS10=8 was shorter than for other values. Past results, real or simulated, are not a guarantee of future returns. I never use backtests to evaluate expected return and risk, but as a proof of concept for a model based on common sense and research. For example, the short interest components are inspired by Short Interest and Aggregate Stock Returns (Rapach, Ringgenberg, Zhou, available on ssrn.com).

Since 2001, SPY has a negative return for MTS10>=7. This is what I call the alarm level. We have different ways to use MTS10 in hedging and ETF strategies. All the details are available in the user’s manual of Quantitative Risk & Value (available also during the 14-day free trial). Going to cash or on full hedge at 7 may not the best way to use MTS10, but for simplicity, this article will look only at out-of sample results based on that.

MTS10 definition has not changed since its inception. It has not been curve-fitted to the market behavior. A component calculation was slightly modified to avoid side-effects. However, all components and look-back periods used for trend calculations have been the same for 5 years.

Now, let’s look at the chart from May 2015 to May 2020. These MTS10 values have been really published for subscribers. SPY is plotted as a $100 investment on starting date, dividends are included. 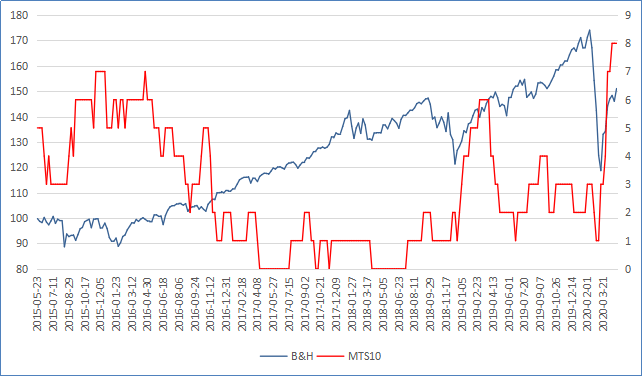 SPY has been in drawdown from May 2015 to July 2016. During this time, the market risk measured by MTS10 has been most of the time above 5. Therefore, our hedging tactics and ETF models incited us to go through this volatile period partially hedged and with an increased exposure to bonds. However, MTS10 was low during the 2 corrections in 2018. MTS10 has not timed short-term market moves (it is not its purpose), but it told us that all corrections from 2015 to 2019 were not the beginning of a bear market. It seems obvious now, but it was not so clear at this time, especially reading headlines in 2015, 2016 and 2018.

One of the best-known market-timing methods is the “death cross”. It recommends going to cash when the 50-day moving average is below the 200-day moving average (50-200dma crossing), and invested otherwise. Applying this rule at every weekly opening with SPY as unique holding would have resulted in a total return of 5.9% on the same period. Another popular timing method is going to cash when the price is below the 200 dma. With the same assumptions, it would have resulted in a total return of 11%. The next chart plots the equity curves of $100 invested on the starting date in SPY “Buy & Hold”, these 2 usual timing methods, and being invested only when MTS10<7. 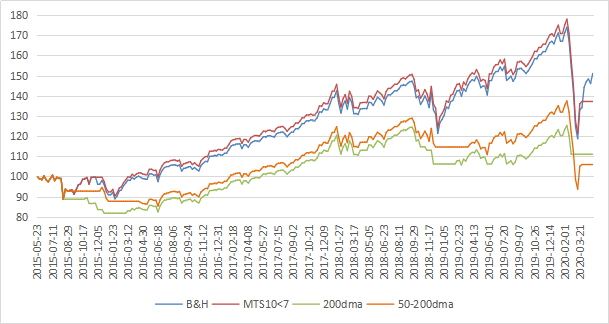 Past performance, real or simulated, is not a guarantee of future results.

The MTS10<7 signal has avoided all false signals given by the 2 other timing indicators, bringing at the market top a modest excess total return of about 2% over buy-and-hold (coming from going to cash a few weeks in 2016). It has not anticipated the COVID black swan. It was suggesting until the end of March that the most likely outcome was a V-shape recovery. It would certainly have been the case if a cure had been found quickly. With the clock ticking on global lockdowns, the damage has become deep enough to reach the alarm level. The MTS10<7 signal is lagging buy-and-hold by about 13 percentage points as I write this, since it jumped off the train halfway of the recent rally. Future will tell if it was right. Anyway, it beats the 2 classic timing methods by 26 and 31 percentage points (also frozen in cash now), thanks to avoiding false signals during 5 years.

MTS10 is a weekly indicator designed with a data sample between 2001 and 2015. If you think it is a bit short, in a next article, I will detail a series of monthly indicators also included in Quantitative Risk & Value. Some of them have been tested from 1871. Unlike MTS10, whose formula is not fully disclosed, this monthly indicator series is open source. All details will be exposed without black box.