(AlJazeera) Fears of war between the United States and Iran have intensified after a US drone was shot down by Iranian forces.

Washington and Tehran disputed the circumstances of the drone shootdown, with Iran saying the unmanned spy plane was downed after it encroached on Iranian airspace, but the US said the aircraft was hit over international territory.

The incident marked the first direct Iranian-claimed attack on US assets and came amid heightened tensions, unleashed by US President Donald Trump's decision last year to withdraw from an international accord that curbed Tehran's nuclear programme.

It was also the latest in an escalating series of incidents in the Gulf since mid-May, including suspected attacks on six tankers, and has prompted international concern alarm that the standoff could escalate into an open confrontation

Here are the latest updates:

Six European countries said preserving the 2015 nuclear deal has become "more important than ever" amid escalating tensions between the US and Iran.

In a joint statement, the countries said they "regret" the US's decision to withdraw from the deal and reimpose sanctions on Iran. They also said they were "extremely concerned" by Iran's decision to scale back compliance with the deal.

"We strongly urge Iran to continue to implement its commitments under JCPOA in full and to refrain from escalatory steps," said the statement from Britain, France, Germany, Poland, Belgium and Estonia.

Trump says he has 'unlimited time' to reach deal with Iran

The US president said he was "fine" if there was no new agreement with Iran, adding that he had "unlimited time" to try and reach a deal with Tehran.

"If it doesn't happen, that's fine with me" Trump told a gathering of religious conservatives. "I have unlimited time, as far as I'm concerned."

Iran alone 'will not take burdens to preserve nuclear deal'

Iran's UN envoy described his country's nuclear deal with world powers as being in "critical condition" and warned "Iran alone cannot, shall not and will not take all of the burdens anymore to preserve" the 2015 agreement.

"As long as illegal sanctions are in place, one cannot be expected to trust the offer for an honest and genuine dialogue," Ambassador Majid Takht Ravanchi said of talks with the US.

French President Emmanuel Macron said Iran and world powers including the US needed to find a way back into talks that restore trust and defuse a dangerous escalation in tensions.

"I believe the escalation, sanctions on top of sanctions, provocations, the military build-up, is extremely dangerous because it could ignite the region, it could lead to over-reactions," Macron told Japanese broadcaster NHK on the eve of a G20 summit in Osaka. 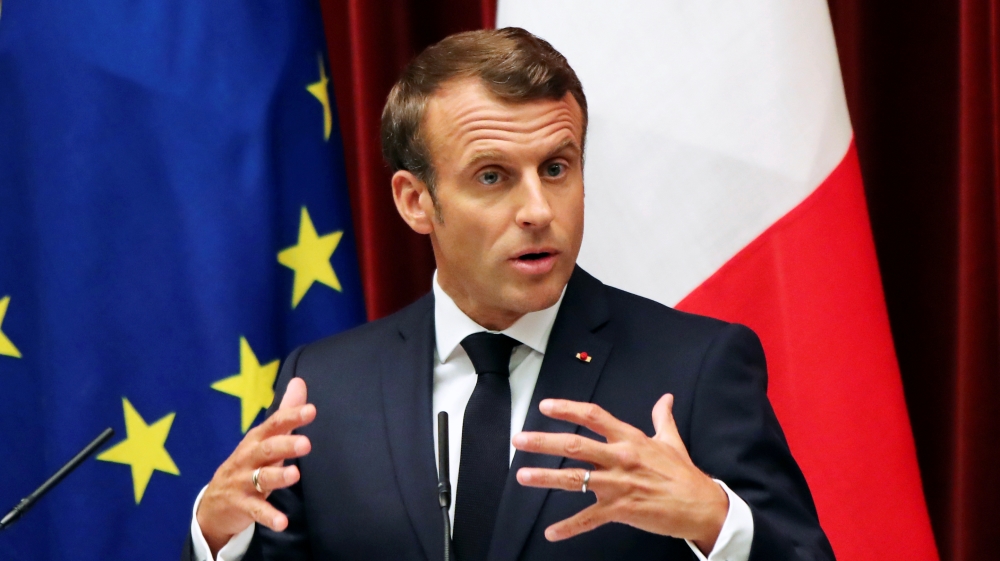 "Now, all parties must find a way into what might be a negotiation that in the short term ensures no one loses face and which allows confidence to be rebuilt," Macron said. "When confidence is lost, you need little gestures to reduce tensions."

No 'boots on the ground' if US attacks Iran

Trump said he doesn't want war with Iran but if there was one, "it wouldn't last very long" because the US has military superiority. He also hinted that any conflict would be waged with air strikes, saying there would no US boots on the ground.

Asked whether a war was brewing, Trump told Fox Business Network: "I hope we won't but we're in a very strong position if something should happen."

"I'm not talking boots on the ground ... I'm just saying if something would happen, it wouldn't last very long."

Trump added that he was being "nice" to Iran for not ordering strikes against Tehran after it shot down a drone worth more than $100m.

Iran 'will not retreat in face of US sanctions and insults'

Ayatollah Ali Khamenei, Iran's supreme leader, said Iranians will not budge or retreat following new US sanctions targeting him and his associates.

A statement on the cleric's website quoted him as calling the Trump administration "the most sinister" US government.

Khamenei was also quoted as saying that "the most hated figures of such an administration accuse and insult the Iranian nation. Iranian nation will not budge and will not withdraw because of the insults".

"The most vicious officials of the [US] government accuse Iran and insult it. The Iranian nation will not give in and retreat in the face of such insults," Khamenei said.

Iran's President Hassan Rouhani warned the US it was pursuing "an incorrect path" by withdrawing from the nuclear deal and imposing sanctions on Tehran.

"Today I tell the Americans that the path you have chosen is an incorrect path," Rouhani said, according to the IRIB news agency.

European signatories have not done enough to preserve the landmark 2015 nuclear deal and it would be in the benefit of European countries and the US to stick to their promises under the deal, Rouhani said.

Iran to speed up uranium enrichment after deadline

Iran will speed up enrichment of uranium after a deadline given to European countries to prevent this ends on Thursday, the spokesman for Iran's Atomic Energy Organization said, according to the IRIB news agency.

"The deadline of the Atomic Energy Organization for passing the production of enriched uranium from the 300kg border will end tomorrow," the organisation's spokesman Behrouz Kamalvandi said.

"With the end of this deadline, the speed of enrichment will speed up."

President Hassan Rouhani said Iran "never seeks war" with the US and was committed to regional peace and stability.

"Iran has no interest to increase tension in the region and it never seeks war with any country, including the US," the president said, quoted by state news agency IRNA.

Rouhani was speaking by phone to his French counterpart Emmanuel Macron, as Tehran and Washington engaged in an escalating war of words following Iran shooting down a US drone last week.

"We have always been committed to regional peace and stability and will make efforts in this respect," the Iranian president told Macron.

IRGC: US would not 'dare violate Iranian soil'

The United States would not dare violate Iranian soil, the head of the Revolutionary Guards' aerospace division said on Wednesday, according to the Mehr news agency.

"Neither America nor any other country would dare violate Iranian soil," Brigadier General Amirali Hajizadeh was quoted as saying by the news agency.

Tensions have spiked between Iran and the US after the Islamic Republic shot down a US drone they claim was flying over their territorial waters last Thursday. Washington says the drone was in international airspace.